The Continuity of Culture through Relocation

A person’s culture is often associated with their global positioning, however that may not always be the case. An individual’s culture is often associated with a country, region, or more broadly, a continent, however this leads to a false identity  since no consideration of where they came from or where they are going to is taken into account. As global culture has grown and progressed, mobilization of different peoples has become all the more a possibility and reality.  America has been the quintessential example of this as it is often referred to as a ‘melting pot’.  However, this melting pot was once home to Native Americans alone, but they were forced to assimilate, clouding the idea of the melting pot. Through disease and harsh violence, they remained as spiritual and connected to their culture as they could. They faced many trials and tribulations along the way, ultimately experiencing what could be called cultural genocide. As one Native boarding school student put it  “Our name isn’t supposed to be ‘Jones’ but Chonku, or something like that and the teachers couldn’t say it right so they just gave us Jones” (Archuleta, M.L., Child, B.D., Lomawaima, K.T., 28).

“Domesticity dominated middle-class women’s writing and culture from the 1830’s through the 1850’s” (Kaplan, 5). This period of time in American history is one of great expansion and imperial acquisition. It was also during this period that immense groups of immigrants from all parts of the world were flocking to the United States. This laid the foundation for what would be known as the “American Woman,” regardless of where she was from or her cultural standards of what a woman was. In this way, women had immensely less cultural grasp as compared to men. They were not only second-class citizens for not being American, but for not being men as well.

Homesickness can mean very different things for different people, depending on their previous residence, and their cultural idea of “home.” It was not their new location that frightened most dealing with homesickness, it was missing out on their culture. In this sense, it could be thought that the feeling of homesickness was indeed the feeling of losing their own culture to another. In this thinking “Americans began to express not just a longing for a home left behind – the characteristic yearning of the homesick—but a longing for a home lost in time” (Matt, 102). “American” ideals, which is a strange idea by itself, since these ideals would seemingly be a blend of other countries’ ideals, were often times strictly rigid with little room for other cultures. It seems in American culture the only way to escape persecution is to find another group to attack, or give up whatever parts of your culture are asked. One way in which Native Americans, for example, were able to preserve their culture was the economic benefits it brought to the American government through shows and events. “’Indianness’ became more lucrative than virtually any government assimilation program that Indians could adopt” (Archuleta, M.L., Child, B.D., Lomawaima, K.T., 74). Although this form of assimilation could be thought of as degrading or as a second-hand culture, it did open the door for future preservation and not a complete destruction of their culture as had been intended.

Trying to Make a Living

The man I interviewed was standing outside the Carpenters’ Union, 60 William Street. He did not want to give me his name.

“Did your father have hard times?” I asked him.

No, he worked for years for the United Cigar stores. He was manager of a store. I am a carpenter, trying to make a living. I have three kids — they’re all girls. I haven’t lived any place else. I lived in Newark all my life. Thirty-five years.

Did you have a happy childhood?

Oh, sure, that’s the trouble. I had it too easy. If I had had to work a little harder, maybe I would have got somewhere. Look at how these foreigners come over and make good.

My grandfather was worth over one hundred thousand dollars. I was born in our big house on Norfolk and Thirteenth Avenue. We had everything. We never wanted for shoes or clothing or eats. I never had an education. I didn’t figure I needed education because I was well off. In those days, the people didn’t think much about education. The property where the playground is on is where we used to have our house. The property is right near the Robert Treat school.

Excerpt from “America, The Dream of my Life.” 3/3/2014. Image re-typed from North American Immigrant Letters, Diaries, and Oral Histories.

This interview is from a third-generation Irish immigrant. It shows the loss of culture through the generations after migration. I think this not only applies to lacking a sense of culture, but a change in their values and mindset as well. This source shows the fracture of culture through the immigration process, rather than the preservation of it. Since the interviewee was born in America, as were his parents being born in New York and Newark, he had a significantly weaker attachment to his heritage. This brings to mind the connection many Americans have now with their ancestral heritage. He went so far as to say in the interview that he had also lost his hard work ethic as well as his drive to constantly become more successful and achieve more that his grandparents and possibly parents had possessed as part of their immigrant mentality. He talked of his being somewhat spoiled, which contributed to him feeling the sense that he did not have to work or try nearly as hard. He even said this is why he did not pursue an education, which is far different from just lacking a stronger work ethic alone. I think it shows a lot that even within a verbal interview he recognized the difference between generations. I believe this goes far to show how the American culture was beginning to change as a whole from a nation of immigrants into a nation that began to identify themselves first as Americans before any other cultural connection.

This is an image from The New York Public Library. I believe this image relates to African American’s ability and desire to preserve their culture in a variety of ways. Bananas are a tropical fruit and working certain plants such as these were causes of their homesickness.  This, however, is more symbolic when put together with the caption of the picture. The quote serves as a metaphor for the perseverance and courage African Americans were forced to have, showing that despite severe injustices, through their roots and heritage they could not be destroyed.

This image is from The Library of Congress, and depicts a young Chinese boy who is also working the fields. This image shares a similar feeling to that of the Banana Plant photo, as the boy gathers Mulberry Leaves, which are native to southern Asia. Although the cultivation is being done in Los Angeles, he remains intact with a part of his culture since these plants have a wide variety of uses in Chinese culture. Additionally, you can see more traditional clothing on the boy, as he is wearing a rice hat. 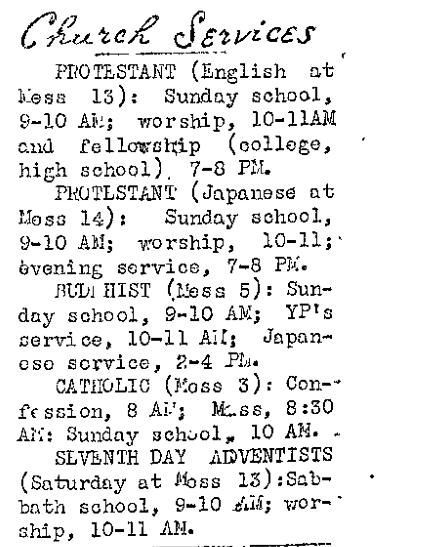 This text is an excerpt from the “Topaz Times” newspaper on May 5, 1942. It was written to show different service times of a local church through newspaper distribution. This is very important to the idea of preserving culture through relocation. First off, one may notice the date of 1942, which is the year that Japanese internment was declared by the president after the attacks on Pearl Harbor, so it may be surprising to find Buddhism in the paper to begin with. This put a huge pressure upon Japanese Americans to preserve their culture in a country that was imprisoning them for actions they had nothing to do with. The only commonality between them was their ethnicity. On the other hand, it does show how strong religion was during this time, not for everyone overall, but each in their own respect. This specific image also shows the more dominant religions in America during this time period, and also tells an unfortunate tale of a lacking religious freedom and forced conversion.

This post was completed as an assignment for the American Studies course, “The Concept of Home.”  A list of the readings that informed this assignment can be found here.

2 thoughts on “The Continuity of Culture through Relocation”