Marvin Gaye. This man is more than just the subject of the documentary titled, What’s Going On: The Life and Death of Marvin Gaye. He played a crucial role in the perpetuation of Motown’s dominance, especially in the 1960s and 1970s. He achieved prominence as a triple threat, displaying talents as a singer, song writer, and producer. In fact, Gaye is considered to be one of the greatest artists of all time. But several questions persist: where did it all begin? Who was Gaye as a product at the controlling hands of Motown? A lover? An artist? A human being?

In the documentary, the audience gains incredible insight into the complex life and musical contributions of Marvin Gaye, from the day of his birth in 1939 until his tragic death at the hands of his own father in 1984.

“I’ve known since childhood I’d be in show business, but not until much later that I’d be an artist, writing songs that are my life story, about relationships and separations.”

So begins the hour-long documentary on Gaye’s life story. It was quite an interesting decision on the part of the documentary to begin with such a quote, highlighting that there is a difference between being an individual in “show business” and being an “artist.” This was reminiscent of a class discussion based on the difference between the performer and the artist. I envision the performer to be an individual who puts on a show. The role of the performer is necessary because he or she provides the body and voice for the performance to occur. The artist can “do” as well, but what distinguishes him or her from the performer is that he or she can think, reflect, and change. While the performer fixates on the product, the artist finds fulfillment in the process.

In the beginning of Gaye’s career as an upcoming artist in Motown, it was no secret that the singer and the label did not always see eye to eye. In the documentary, song writer and producer, Lamont Dozier, discusses the conflict: “Now he was gonna give us a lot of mouth, a lot of lip, about cutting me “f” and “f” keys and ‘I can’t sing stuff like this.'” However, Gaye ultimately collaborated well with Motown producing a series of hits including, “Stubborn Kind of Fellow” (1962), “Hitchhike” (1962), “Can I Get a Witness” (1963), and “How Sweet It Is (To Be Loved by You)” (1964). Thus, it can be argued that Gaye began as a performer for Motown Records.

In the 1964 hit, the audience can see the amount of control Motown Records exerted over Gaye including his style and music. Gaye’s style greatly conformed to the ideal product that Motown wanted to sell to its audience: a clean shaven face, hair neatly groomed and set in place rid of natural qualities, and a polished suit and tie combination. 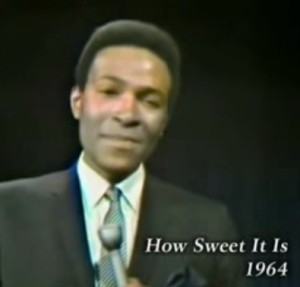 Acceptable aesthetics was one way in which Motown manipulated Gaye in order to appeal to a white audience. In the 1960s, there was a struggle for black music acceptance among the white community. In fact, it was Berry Gordy, the founder of the company, who made it fashionably acceptable for whites to acquire black record collections. This was incredibly pivotal, especially during a time of racial turmoil in the United States. In order for Motown Records to appeal to whites, they had to create an image that was accepted by whites, hence the polished look, as well as create music that sounded pleasant and relatable to all fans. Thus, “How Sweet It Is (To Be Loved By You)” with its catchy tune, soothing vocals, and relatable lyrics resonated well with the white audience.

However, Gaye did not completely comply with the restrictions imposed by Motown. As Gaye progressed in his musical career, he slowly transformed from an agreeable performer to an individualistic artist, confident in exercising his creative freedom. When Motown would introduce demo tapes in the studio, Gaye did not settle for the original recording. If he could not hit the higher notes, he would often enter into subtle falsettos. Dozier often stated in the documentary that Gaye had an extraordinary talent in transforming the demo tape into an entity with life. He could do this all with his voice. Through a smaller, personal scope, Gaye valued being an artist. Through a larger, societal scope, Motown Records placed greater importance on the performer that could generate the most sales and appeal to both blacks and whites.

Further along in his music career, Gaye came out with “I Heard It Through the Grapevine” in 1968. In the documentary he states, “The lyrics of my songs are always about what’s happening in my life…”  However, was this always true? The meaning behind this 1968 song, Gaye’s first hit single, is that a man discovers that his wife is cheating on him. Relating the song’s message to his personal life, Gaye had been married for about five years at that time to Anna Gordy, the sister of Motown’s founder, Berry Gordy. Through a personal scope, Gaye truly believed that his wife had been cheating on him. In the documentary, Gaye states: “I believed every word of that song, it was happening to me, the doubting, the friends whispering in my ear, the suspicions.” Meanwhile, biographer David Ritz, also mentions that much of this betrayal experienced by Gaye was fictional. Gaye had difficulty relating to women, particularly to his wife. Gay would actually frequent a variety of motels and knock on doors in the middle of the night, convinced that his wife was sleeping with another man. Ritz expressed that Gaye was full of paranoia and “…needed this kind of drama to excite his creative imagination.”

Thus, another facet for music lover exploration is this question: what is authenticity? In our class discussions, we grappled with what it meant to be authentic as a performer and as an artist. Authenticity should reflect truth and integrity– is it not authenticity that reels the audience into the track? Through a smaller, personal scope, Gaye was authentic in his music. Though Gaye fabricated a story of lies and feigned emotions, he honestly believed in the content. However, through a larger, objective lens, societal consumers can see that Gaye was not truthful. The events of his life were not accurately reflected in his music. Thus, should authenticity be rooted in objective facts? Or can authenticity be a construct of the mind, not objectively accurate but sincerely felt?

Though Gaye struggled to incorporate parts of his life, truthfully, into his music, 1971 proved to be a successful year in which he integrated factual events into his songs. “What’s Going On,” one of Gaye’s all-time hits, was composed and produced by Gaye. The song, which is composed of pro-love, pro-solution lyrics in the midst of war, was inspired by his brother’s letters. At that time, Gaye’s brother was serving in the Vietnam War. As a result of the national controversy revolving around US involvement in the foreign conflict and his own personal views, Gaye was inspired to create an album that  “reflected America through the eyes of a vet returning home.” Despite Berry Gordy’s opposition to record and release the track, Gaye eventually did as he pleased  after Gordy grew tired of his refusal to perform on stage or work in the studio to produce more music.

In the documentary, Gaye reveals his inner thoughts concerning the production of  “What’s Going On”:

” ‘What’s Going On’ was my masterpiece with the help of God and the recording studio, that was the one place I knew I could control the forces of chaos around me. At last, I felt free to make things happen the way I wanted.’ “

Through a personal lens, one can see that Gaye utilized music as an outlet to vent his inner frustrations concerning the Vietnam War. However, in a larger societal scope, the audience can see that Gaye utilized his musical ability to voice the collective concern of the American people. In the documentary, Gaye states: ” ‘I felt the strong urge to write music and to write lyrics that would touch the souls of men.'” Gaye did indeed touch these souls– as John Legend, singer, stated: “….everybody’s brother could have gone to war, everybody, themselves, could have gone to war, so they personally felt connected.” Thus, Gaye experienced a personal and societal obligation to be the voice of people who could not speak for themselves.

The last aspect that requires further exploration, inspired by class discussion, is this: what responsibility does the artist have to act as a voice for his or her listeners? Should they hold an obligatory role at all? All art is the product of the times and music is not an exception. Thus, Gaye, due to personal and societal urgency, created an album to serve as a representative for those who shared feelings with Gaye on the topics of war, police brutality, loss, and protest. While the album and title song most likely served as a coping mechanism for Gaye during these harsh times, it can also be viewed as a way that brought together the American audience, distraught over the tumultuous events of the early 70s.

Marvin Gaye was a man who grew and became his own through his music. Beginning as a hit performer for Motown, Gaye transformed through his experimentation with artistic freedoms. He endured creative conflicts with Motown Records, struggled with finding and even forging creativity, and balanced a personal purge with a societal responsibility to be the voice of a conflicted people in the 1970s. This documentary, What’s Going On: The Life and Death of Marvin Gaye, was a wonderful presentation of Gaye’s biography. It showcased a fair and balanced view of Gaye through its integration of a variety of perspectives and resources that shed light on both the bad and good of Gaye’s life. It was a presentation of solid facts and it allowed the audience to form their own opinions.

I have always found Gaye to be an intriguing figure but it was his irresistible music that provoked me to learn more. If I were to further my research on Gaye, I would have loved to research artists that were particularly influenced by him through an analysis of their songs. Thus, I could enhance my understanding of Gaye, not only as a mortal man, but as a timeless spirit, continually contributing to the industry. “How Sweet It is (To Be Loved By You),” ” I Heard it Through the Grapevine,” and “What’s Going On” are among my personal favorites. I was inspired to complete this piece on him because I realized that it was finally time to learn more about the man behind the music. Little did I know that this man and his music could not be separated- they were, and are forever, one.