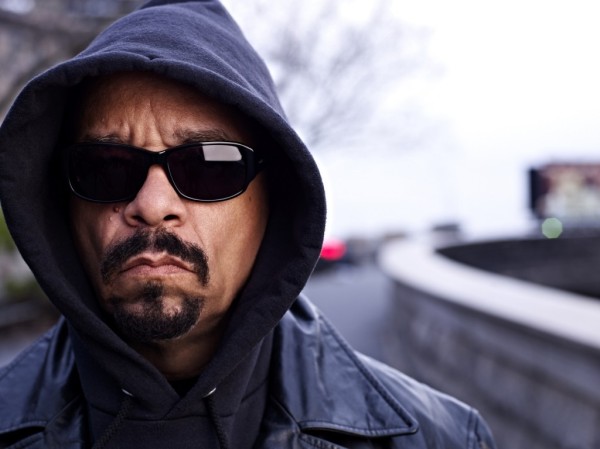 Ice-T, director and host of Something From Nothing: The Art of Rap (2012)

In Something From Nothing: the Art of Rap (2012), director Ice-T seeks to explore how hip-hop’s most influential stars craft their rap verses. His status as one of the pioneers of gangsta rap allows him access to the masters of the genre, and the documentary gives insight into how these artists write and perform. It also explores hip-hop’s roots, the difference between a rapper and an emcee, and what rap means to its progenitors.

Ice-T leads several of the interviews with the same question: Why do you think hip-hop does not receive the respect it deserves? The artists featured all answer differently—producer Marley Marl believes it’s because hip-hop artists do not respect each other, and that the public will begin to take the genre seriously when rappers stop having “beef” with each other and show some camaraderie. DJ Premier thinks that mainstream audiences don’t understand the street language used in rap verses. Without this understanding, he says, rap music just sounds like noise. Nas believes that hip-hop and its artists are perceived as a “threatening,” invading influence.

It’s a good question. As Ice-T himself says, “Rap has introduced poetry to a whole new generation. We’ve crossed color lines and changed lives. It just seems wrong to me that we still don’t get the respect like jazz, blues, or other musical art forms.”  It’s a question that seems to ground the film, and as Ice-T travels from East Coast to West, interviewing the greats of hip hop, it’s difficult for even the casual listener not to come away with more respect for the artistry and creativity that has made these emcees into stars.

What differentiates a great emcee from a rapper? As Big Daddy Kane says, “Well, a rapper is, you know, someone that rhymes. I mean, you can consider Dr. Suess a rapper.” An emcee, on the other hand, must be capable of verbal acrobatics and have the presence to command a crowd. Lyrical skill is a necessity, and rap verses are frequently quite complex—something that is unfortunately often overlooked as mainstream audiences jump into analysis of what the lyrics mean, and ignore how they are put together. Take Eminem, who is widely considered to be one of hip-hop’s greats, thanks to his complicated rhyming schemes—but who is much better known for his extremely divisive subject material and his ability to offend middle class suburbia. In an interview with Rolling Stone in 2011,  he was asked by the interviewer to come up with a verse about the interview itself. In two minutes, he produced the following:

This dude doin’ this interview wants me to spin a few
Lyrics while I tie my fuckin’ tennis shoes in the nude
A romantic interlude in a livin’ room
In an inner tube with a dude with a bit of lube
Fuck that, I’m sniffin’ glue, sippin’ gin and juice
And a little bit of paint thinner with my dinner too
You better pay me for my bars like your rent is due
Now hurry up and finish, dude, before I finish you

As the interviewer notes, “Every line rhymes with the word ‘interview’– some twice, and one even three times.” And Eminem isn’t the only hip-hop artist who takes such care with his verses. Responding to a question about how he crafts his verses, Rakim (also known for his complex, intricately crafted lyrics) describes how he draws 16 dots on a piece of paper and views the space between these dots as a graph for him to plot words and syllables. His aim is to fill this space so that “If the beat [is] perfect, I can take it to the point that there’s no other words you can put in those four bars.” Throughout the documentary, hip-hop artists from Grandmaster Caz to Kanye West discuss how they write down and tinker with their lyrics, sometimes for weeks or months. Given this effort, it’s astounding how hip-hop is still largely dismissed as a musical genre. As Brandon Soderberg says in Spin (emphasis my own):

Rap music’s significance is almost always framed in pop sociology terms or because it has become a driving commercial force. To most people, hip-hop’s sort of like Donald Trump: Loud and annoying and man, one day let’s hope it goes away, but it sure has made a lot of money, so we all should shut up and cake off of it. […] It has become a phenomenon almost in spite of its artistic merit.

Still, though Ice-T is correct in saying that hip-hop should command more respect than it has received, his perspective (and hence, the perspective of this documentary), is not entirely unbiased. As Spin notes, Something From Nothing: The Art of Rap puts heavy focus on the old school greats, with Kanye West the closest to young blood featured in the film. Many rappers say that the reason they wanted to pursue rap was to give the people from their side of the streets a voice, and it’s reflected in their catalog. From Grandmaster Flash and the Furious Five’s “The Message” to Kanye West’s “Gorgeous”, hip-hop is at its best when its lyrics provide social commentary. Early in the film, Lord Jamar of Brand Nubian speaks of hip-hop’s roots. By taking music programs out of schools, “they tried to take the music from us,” he says. Hip-hop, which turned the record player into an instrument, gave the black community a musical voice again.

But as Slate‘s review of the film points out, “hip-hop is no longer the scrappy upstart it was in 1986.” Though once a vehicle that gave a voice to a community of people who had to struggle to be heard, hip-hop has now become its own force in popular culture, and its lyrics now read more like a list of brand names, a ditty about the perks of being rich and famous. Asked for one thing he would tell his peers in hip-hop, artist Kid Cudi said, “I think the braggadocio, money, cash, hoes thing needs to be deadened. I feel like that’s holding us back as a culture, as black people. It doesn’t advance us in any way, shape, or form.” And while there’s far more to hip-hop music than this braggadocio, it can’t be denied that these “money, cash, hoes” songs are what the genre has become best known for in the 21st century.

The reason I chose this topic was because of the excerpt we read from Jeff Chang’s Can’t Stop, Won’t Stop: A History of the Hip Hop Generation. As someone who does not listen to hip-hop music besides what’s on the radio, it amazed me that this genre was once responsible for being a voice of the people. After that week’s class, my interest in the cultural and technical aspects of hip-hop grew, which is what drew me to this documentary. Like it implicitly sets out to do, Something From Nothing: The Art of Rap increased my respect for both the hip-hop genre and its artists. It has also caused me to separate hip-hop’s roots from its funhouse mirror reflection in popular culture today.

As Yasiin Bey (formerly known as Mos Def) says: “Rap is not pop. If you call it that, then stop. It didn’t start out as a popular culture movement, it didn’t even have pop culture ambitions. It’s a folk art. It’s folk music.”