The template [insert deep quote with no real significance here] undoubtedly serves many artists well in producing overly saturated music and temporarily granting them the success that will quickly wither away, like their toupee covered  hair lines. However, Sugar Man summons his music from the gritty depths of reality, not a meaningless deepness spawned from artificiality. The documentary, Searching for Sugar Man, is directed by Malik Benjelloul and chronicles the life of Sixto Rodriguez, a Mexican American folk musician who made music during the 1970’s in Detroit Michigan. Rodriguez is one with the Sugar Man; he is a fragmented character of his own reality created by his environment. “Sugar Man” is the first track in Rodriguez’s first album Cold Fact, which was released in 1970. To be a sugar man, woman, or child is to withdraw from the type of reality Rodriguez lived in and enter the whimsical world of self-indulgence, exploration, and acceptance. True reality is constantly battling the alternate realities created by music, a battle that has led to an internal dismemberment of the self, which Sixto Rodriguez aka Sugar Man endured himself, but unknowingly reversed for many.

Dennis Coffey, who co-produced Rodriguez’s first record called Cold Fact had a notable first encounter with the elusive Rodriguez, setting a tone for the story to come . The night Rodriguez was “discovered” was set to the rhythmic murmurings of freight ships along the Detroit River. However, those sounds were smothered by the mist that clung closely to the atmosphere. In Coffey’s recollection, the collective scenery exuded a very Sherlock Holmes-esque vibe. Inside of the small performance venue located next to the Detroit River, the stubborn fog, like ants,  entered through the crevices in the room and  engulfing the man who sat on the stage with his back to the audience. Coffey has worked with Marvin Gaye, Stevie Wonder, The Temptations, The Supremes, Gladys Knight, Ringo Starr and more star power that makes your jaw drop. But please pick it up… so that we can proceed. It is disrespectful to  Rodriguez, who never reached the same status as these stars in America. Yes, Rodriguez who is constantly compared to Bob Dylan in his ability to write music, did not reach the lavish lifestyle that is equated with musical success in today’s standards.

Sugar Man is a drug God. Yet, Rodriguez who is the Sugar Man, is not a drug dealer. Rodriguez and drug dealers share a common objective of providing an escape from reality. And this similar objective is achieved by  restoring the “colors to dreams“ and providing alternate realities to those who have succumb to the Detroit scene. The Sugar Man in Rodriguez’s first song “Sugar Man”, is a lingering ghost of empty promises  and false realities. He dishes out jumpers, Coke and sweet Mary Jane which sends users to into a drug induced and in-genuine state of euphoria, but a euphoria nonetheless. When they return from these trips, they stumble over their once lost hearts, that had been present all along , too bad that by then, “It had turned to dead, black coal”. Rodriguez’s own heart… had reportedly stopped beating when he standing in front of the audience, raised the gun to his head and pulled the trigger or in a separate account committed suicide by lighting his body on fire. ~The End~

I am a sugar girl. As a young girl, I was oh-so-vastly different from my peers. So much so, that it was painstakingly evident in my daily social interactions. I simply could not relate.  And so, I conjured up three ways of transcending reality. One, being  my love for documentaries as a second grader . This allowed me to momentarily fleet from myself by investing in the lives of others. Nevertheless, this love did nothing to enhance my social skills with fellow second graders who left the documentaries to the adults. To the adults, I was sophisticated, but  fellow children were more blunt about their perceptions of me. To them I was “just straight up odd.” Enduring this constant criticism was the catalyst of my change. A once incredibly extroverted child, I mutated into an introverted sort of ‘space cadet.’ (According to the Urban Dictionary, “The space cadet is not necessarily a person of low intelligence or a heavy drug user, but rather one who is so easily lost in reverie that he or she loses all awareness of the surrounding physical world.”) I slipped into this “reverie” by losing myself in music.

The second method I used to escape from the real world was  music. This was evident in the songs that I would  hum to myself, songs that  nobody in my classes knew(except for the teachers which as you can imagine made me even more popular among my classmates). Songs like  “Eleanor Rigby” by The Beatles or ” Buffalo Soldier” by Bob Marley and the Wailers. My parents raised me on the ‘good stuff.’ Yet, both of my parents had a different perception of what that “good stuff” actually was. To my father, it was The Beatles, Bob Marley, Pink Floyd, The Temptations, All things Motown, and the rest of the music that he listened to growing up though the 60’s and 70’s. For my mother, that music was Tito Puente, Gloria Estevan, anything Latino-infused and Madonna, because of course, we cannot forget about Madonna.

Yet, other girls walked around trying to embody Britney Spears. Mind you, we are talking about the early 2000’s a time that people of my generation would consider a monumental time in the history of music. While my elders, like widowers mourning their dead husbands, continued to mourn the loss of the music that they had once loved. And in having a grandmother’s musical taste (sorry if I am stereotyping grandmothers, who knows maybe they could like Rick Ross for all I know), the social gap between my classmates and I widened. I had chosen my side.  As I stared off into the abyss of classroom conformity, I, a seven year old asked myself whether or not  I would conform ( perhaps not in those words, I mean I was seven), or instead keep my individuality? Why did I have to choose? I thought music was supposed to bring us together! But music becomes anthropomorphized.  Its  melodic undertones, its message, its political agenda are overshadowed by idealistic pursuits and it in turn become a false person that people try to embody. The audience becomes the music, the music becomes the audience.  I am neither. I a paradoxical amalgam. I am a sugar girl.

Yes… this is a 5 year old me holding a guitar …a direct indication of my musical inclination.

The third place where I could escape reality was in Queens, New York. In Queens, I was free to be the hippie child that my heart made me feel that I was. My uncle’s house lifted the veil of facade that I had worn in all other places and in Queens I could be me. Let me tell you a little bit about my uncle. He was the center of everyone’s existence, like the force of gravity holding the family together. He was a musician himself, a culmination of Bruce Lee (because of his looks) and a resurrected Jimi Hendrix ( he was the master at playing the blues). His resemblance to Sixto Rodriguez is striking and propelled my interest in the search for sugar man. 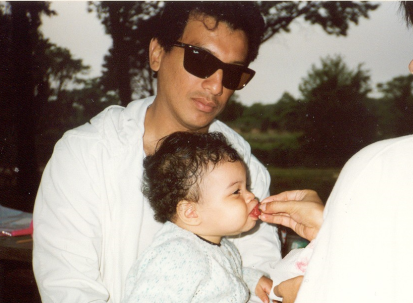 My “Tio” (Uncle) , who bears a close resemblance to Sixto Rodriguez (At least in my opinion).

Meanwhile, let us rewind from the 2000s of my life to the late 1990’s of the lives of  Stephen “Sugar” Segerman and Craig Bartholomew Strydom, two fans who commenced separate  investigations to figure out what had happened to Sugar Man. But I thought the journey had ended? How does the story go from Detroit to South Africa? It turns out that Sixto Rodriguez had unknowingly aided in the reversal of the internal dismemberment of the repressed people of  South Africa. As the story goes , a young American girl visiting her boyfriend in South Africa had brought  Sixto Rodriguez’s record over from the United States thus serving as a catalyst for the movement that was to come. The album was copied and distributed in South Africa. Rodriguez’s liberal music gave the youth inspiration to fight the oppressive regime and the period known as the Apartheid that suffocated freedom and racial equality.

RODRIGUEZ LIVES ON. And if you think that I mean solely through his music, you’re wrong. Segerman and Strydom found him living in Detroit, working in construction. His deaths had been mere rumors.  Rodriguez was more famous than “God” and “Elvis” in South Africa, in that his music surpassed the oppressive government which regulated free speech and all forms of media. This censorship of expression was due to South Africa’s conservative nature, limiting the self. However, Rodriguez’s music was the antithesis of this. His personality and overall being was multi-faceted. This was a sacrifice necessary to preserve the beauty and individuality of his music despite the fact that he was not financially rewarded, but infinitely revered by his audience for his authenticity. He finds happiness and purpose in the humble life that he lives… and this will perhaps forever crucify readers minds.