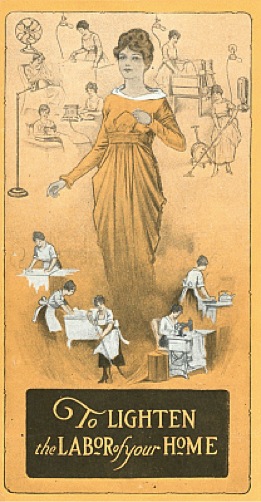 The image presented above is evidence that simple advertising was used to attract the eyes of the man or woman of a household to get them to purchase the next innovations in household appliances. The Western Electric Company was trying to find ways to limit energy use but still be efficient. Innovated machines and consumer goods were thriving in the marketplace because the American family sought to stay up with the newest and most recognized products for their homes. In regards to the housewife herself, “Commodities would solve the problem of the discontented housewife, foster pride in the provider whose job offered few intrinsic rewards…” (May, 164).

When you think about capitalism, you might say it’s the way of the land or it’s how the economy gowns and flourishes. But do you ever think who might be doing most of that work? In American society during the mid 1900s up until about 1970 the male was the “breadwinner” and the female was the “housewife.” The focus for a married couple during this time was to maintain a stable home and put the family first, even if that called for specific gender roles. The role of the woman in the household became very demanding inside and outside of the home. She was the caretaker of the home and was the inspiration to her man. The woman became a “greater incentive to succeed in business career(s),” and gave the man a ‘feeling of accomplishment’” (May, 168). So why was she a slave to the kitchen and childbearing duties?

The home became a domain for the man, which he controlled with his efforts to finance everything, which allowed the housewife to purchase commodities for the household and keep things running.

“….a man could display his success through the accumulation of consumer goods. Women would reap rewards for domesticity by surrounding themselves with commodities, they would remain content as housewives because appliances would ease their burdens” (May 156-157) 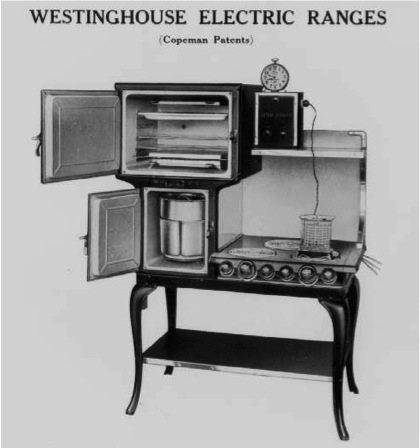 Before the rise of suburbia, companies were trying to make appliances that added to the household but used a limited supply of electricity called all-in-one products. The practice that is involved in a model such as the one presented  in the ad is called “diversifying load.” These products would make it easier for one to use appliances in the kitchen while saving energy at the same time. Products such as these would also makes things less time consuming for the housewife, but as times advanced the purpose of the appliances were not to do such things. “Appliances were intended not to enable housewives to have more free time to pursue their own interest, but to help them achieve higher standards of cleanliness and efficiency, while allowing more time for child care.” (May 163)]

The commodities purchased for housework were to aid the housewife in her caring of the house and children, not to give her any escape from her daily duties. To enable her to stay in her place in the home, “the commodities that people bought promised to reinforce home life and uphold traditional gender roles” (May, 158). Even the homes that were built for families were built to keep women at work in the house. “Houses were designed to accommodate families with small children. Builders and architects assumed that men would be away at work during the day and the houses would be occupied by full-time homemaker-mother” (May, 163). The woman had no place of her own in her house. Due to the house set-up, she couldn’t even cook in peace or relax in the living room without worrying about the kids:

“Kitchens were near the front entrance, so mothers could keep an eye on their children as they cooked. Living rooms featured picture windows facing the backyard, also to facilitate the supervision of children” (May, 163). 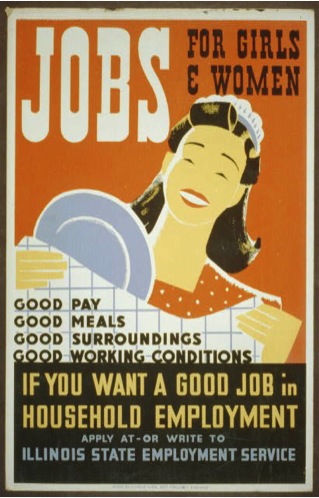 Caption: “Jobs for girls & women If you want a good job in household employment apply at – or write to Illinois State Employment Service,” [between 1936 and 1941]. Courtesy of Library of Congress WPA Posters.

Women did not have a strong presence in the workforce. The public opinion postwar presented the assumption that “a woman who ran a home had a ‘more interesting time’ than did a woman with a fulltime-job” (May, 159). This job advertisement shows how the struggle for a woman to rid herself from household duties is difficult. If a woman would want to bring in an extra income into the home to expand on their families budget to purchase more commodities, she still had to subject herself to the enslavement of the home itself. The ad offers “jobs for girls & women” in household employment. For women, it was a way to make money for things they already did in their own home, and for girls it was a way to practice for what they would be subjected to for the rest of their lives.

If a woman decided she wanted to help the man out and bring in an extra income, she had to make sure not to “disrupt domestic power,” and not to “undermine the authority of the male breadwinner” (May, 159). With women being subjected to the gender role that was set up for them, they often found themselves “feeling trapped and isolated, facing endless chores of housekeeping and tending to children. For them, (the life they lived) was not a life of fun and leisure but of exhausting work and isolation.” The housewife might be a way to describe a woman that stays home and enjoys working in the home, but looking at how hard the woman worked with little reward they might be considered more along the lines of a houseslave.

This post was completed as part of assignment on how the idea of home and the concept of domesticity has been used in marketing during different historical moments and in the present. For additional information on the assignment, please visit: https://americanstudiesmediacultureprogram.wordpress.com/the-concept-of-home-spring-2014-selling-home/.

One thought on “Housewife or Houseslave?”