The idea of the “American way” is one that is usually centralized around ideas of free market economy and the pursuit of capitalism. Stemming from this concept is the idea that if one’s desire is to constantly have purchasing power, there must be a system in place to control and influence what the population purchases: advertisements. Although advertisements have drastically changed in both appearance and method of delivery over the past decades, they still serve the same purpose of not only informing, but convincing, consumers to buy a certain product. Advertisements usually gain the attention of a more selected audience, and in the rise of American society, women viewed as domestic workers were much more often targeted in these advertisements than other groups.
First off, women’s roles in the evolving society were often of a much more secondary role than those of their male counterparts. They were viewed as inferior, although they gained more respect and rights as time went on. Due to this view, they were displaced from the majority workforce, and left with secondary jobs with lower wages as one of their various disadvantages. This caused many woman to remain home in an effort to take a more matriarchal role, since they lived in a patriarchal society. This cultural phenomenon was affecting the advertising market as well. Advertisers knew that women would be home most of the day in an effort to keep the children as well behaved and educated as possible, while also maintaining as close to a pristine residence as possible. “The metaphor that prevailed throughout the debate was that of a race. But it was not the arms race or the space race; it was the consumer race—centered on the home” (May 156). Advertisers made a conscious effort to target these housewives in order to get the largest audience of consumers interested in their products. As also stated in May’s articles, the goal was not to grant women in the household more free time, but was to give them the piece of mind that they were doing all in their power to keep their house at a top level in order to impress the suburb community that they were now engulfed within. Companies began to constantly produce not only products to make women’s lives easier, but also a vast marketplace for household goods, appliances, automotive maintenance, household maintenance, and even products to maintain one’s surrounding property.
Another form of consumerism within the marketplace was the idea of commercial domestic labors such as commercial laundry mats, hotel apartments, and delivery meal service. Some of these new enterprises brought continued success, others such as the commercial Laundromat remain in business while not necessarily flourishing, and others failed, like the meal delivery service which attempted to provide necessary provisions for meals on a daily basis to its customers (Cowan 108). All of these instances provide the framework to discuss how advertisements targeted and transformed the domestic sphere into a consumer market.

This image attests to very epitome of changing domestic consumerism. The initial way is the play off the new suburban lifestyle housewives and American families in general found themselves in, exclaiming how “Folks always end up in the kitchen.” The ad also supports the idea that everything had to be the newest and latest model, while still maintaining affordable prices, with phrases like “only a few dollars a month on easy FHA terms.” The idea that the housewife was there to ensure the household was the cleanest, latest, and most modern put neighbors not in competition, but ensured for manufacturers that they would have a constant and consistent consumer basis. As the kitchens were put toward the front of the house to give them a better position for watching their children outside, it was assumed that the woman of the household would most often reside in that part of the house, and ads such as this one are playing into the notion that since it is the woman’s part of the house, she would want to do her job, and go beyond keeping it extra tidy and presentable to visitors.

“Built for the Future. Admiral 20″ TV. World’s Most Powerful TV. Ready for UHF Stations.” [1951]. Courtesy of Library of Duke University.

Here, another prime example of American domestic consumerism is displayed by Admiral presenting their newest 20-inch television set. This advertisement plays into the constantly evolving domestic marketplace for new appliances. All of these appliances, not just televisions, promised a whole new level of ease or leisure for their consumers and as stated by President Nixon in his show room display with then Russian premier Nikita Khrushchev, “a race for consumerism.” He believed leisure and comfort were the key to American happiness and success as opposed to any other means. This is shown vividly within the advertisement as they exclaim that this television set is “built for the future,” and further claiming it to be the most powerful TV in the world. Television sets grew rapidly in popularity with Nixon referencing that there were “44 million American families… with 50 million television sets” (May 155). In regard to the targeting of women in this advertisement, the only visible person is a mysterious woman in a veil. Her veil along with her golden earrings and large golden necklace display her sexuality and prowess as the woman of the household, elevating her self-esteem higher and raising her (the viewer’s) interest in the product. 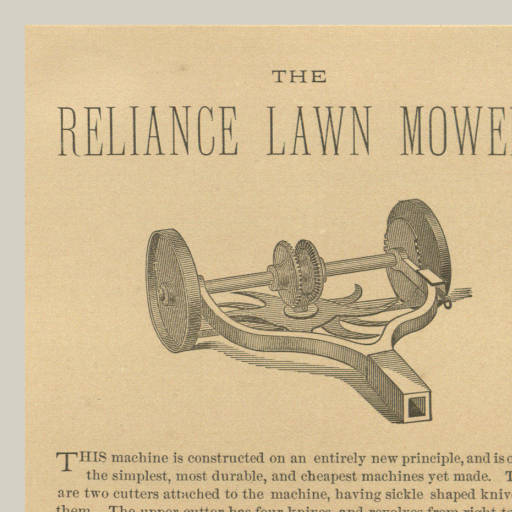 Although this advertisement is directed more at the male audience within the household, as its name portrays a strong and reliable product, it still maintains the domestic consumerism that took place within the suburban American society. It does not directly play into appliances, the household, or namely the kitchen, yet it does play a role in the domestic capital market through suburban property maintenance of the land surrounding the home. It once again plays into the competitive suburban nature of neighborhoods, as well as the added convenience of an easier way to maintain one’s lawn. It follows the revolving theme of ease and leisure providing, an easier way to accomplish a task which gives one more time to relax or perform other domestic duties within or around the house. This competitive nature was fueled because, unlike the kitchen or inside of the home, the lawn was always visible to everyone. This created a rush on lawn care products, even to the extreme of spray painting a lawn such as a comedian suggested, saying “why not just paint your lawns green” (Steinberg).

This post was completed as part of assignment on how the idea of home and the concept of domesticity has been used in marketing during different historical moments and in the present. For additional information on the assignment, please visit:https://americanstudiesmediacultureprogram.wordpress.com/the-concept-of-home-spring-2014-selling-home/.