Objects are inherently meaningless and can also have a proliferation of meanings. Similarly, a home follows the same idea as objects. A home is not just a building with a roof, but a place filled with meaningful objects. The objects are parts of a larger sum, that being the home and its significance. The home and the objects filling it act as an “archive of feelings” and a projection of a constructed social status (Cvetkovich 112 ). The objects allow a glimpse of the composer’s valued mentalities. Examining some of the objects from Bobby Buscher’s home illustrates an appreciation of personal spaces that are modest in appearance but personally significant, and objects that foster contemplation, reflection, emotion reaction, and, overall, a further enrichment of the objects and personal space. 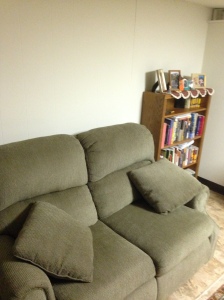 Over many years Bobby has accumulated many books quicker than he can read them, as his enjoyment of reading and learning has grown since the eighth grade. Bobby gets enjoyment from owning the books seen above and the many more hidden away in cardboard boxes. Into his college career, Bobby has grown fonder of the exchanges of ideas. For Bobby, the book represent sources of knowledge that he has gained and can reference and reexamine to stay familiar with a text or author. They demonstrate how he wishes to be thought of: as thoughtful and a learner.

The objects in a home serve a purpose beyond their intended application, such as performing a personality or appearance of status. For example, the film The Queen of Versailles captures Jackie and David Siegel’s building of America’s largest home: 90,000 square feet with over a dozen bathrooms and $5 million of Chinese marble.  The house and its contents is one’s ultimate status symbol. “Bobby’s Buscher Bookcase” offers a couch for sitting and reading from the bookcase. Bobby’s constructed status is not of decadence, but of cultural acquisition and reflection on ideas. 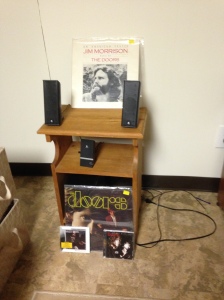 The speakers came from Tom Buscher. Originally the speakers were used in his work office until they were given to Bobby in high school. Interest in The Doors also came from Tom Buscher. The exact date of introduction to The Doors is unknown, but Bobby began to listen to them in the eighth grade, and from that time his interest and studying of the music and band members grew. Discussion of band members and lyrics developed greater appreciation of music, history, and overall, learning.

Cvetkovich notes that “affects–associated with nostalgia, personal memory, fantasy, and trauma–make a document significant,” and the document allows for a study of the individual (Cvetovich 112). Superficially, the speakers and albums tell us some of Bobby’s musical interests. More important is the history Bobby has with music. The speakers were given to him by his father, and The Doors, too, came from his father. Music grounds moments of Bobby’s life and feelings, such as driving to the shore with his father, and a feeling of ease in the car while listening to The Dark Side of the Moon. Music recalls discussion with his father and brother dissecting lyrics and song meaning. Music is more than instruments and lyrics; it is a device to recall the past with all of its pleasures and pains. 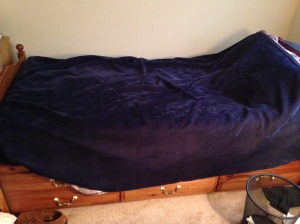 For many people the bed is the center of their bedroom, and the same holds for Bobby. This bed has belonged to Bobby since he was three to five years old. For as long as Bobby can remember he has always treated his bed as a place of both rest and work. From high school to college he has spent many hours reading, writing, typing, and sleeping in this bed. It is a place he feels most comfortable and at ease to concentrate on studying without anxiety to find a place that seems conducive to concentration and diligence.

Most people might think of a bed as a place of comfort and sleeping. For Bobby, comfort is found in a place that offers little physical and mental agitation. He feels his bed is that ideal place of comfort that is conducive to working and relaxing. Like the couch near the bookcase, the bed is not cluttered with pillows or elaborately colored and patterned.

The creation of home and domesticity pulls from various materials and capital. Through material and capital consumption the home becomes a place to deposit values, emotions, and constructed status. Thinking about how Bobby has developed spaces in his home, we can see that the objects have depth beyond their superficial appearance and use. The materials offers glimpses of Bobby’s appreciations and how he wants others to think of him.

This post was completed as part of an assignment interpreting the “material culture” of home, and how objects, keepsakes, and ephemera from our domestic lives contribute to our social identities. For additional information on the assignment, please visit: https://americanstudiesmediacultureprogram.wordpress.com/the-concept-of-home-spring-2014-the-archeology-of-home/