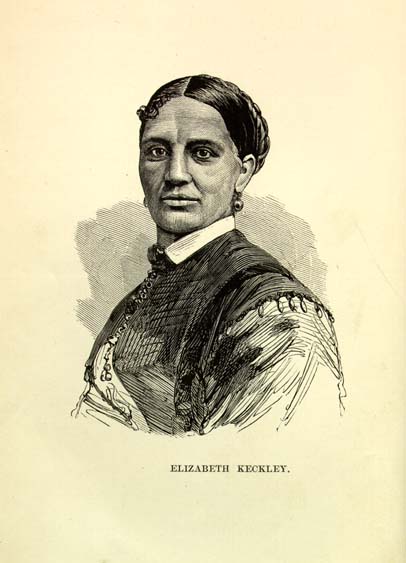 Portrait of Elizabeth later in life

Elizabeth was born a slave in Virginia and at the age of four was the maid to a new born. After many years of moving around, she ended up marrying a white man who used to be her Master. After he died, the estate owner claimed that she was to be a slave once more and the only way to gain freedom for her and her son was through payment. With some help, she was able to leave and head to Washington D.C. where she quickly became the dressmaker for Mrs. Jefferson Davis. At this point in time, the south was beginning the process of succeeding. Having Elizabeth be working so closely with Mrs. Davis gave her access to the domestic life of the Confederate President. Mrs. Davis spoke frequently to Elizabeth about their future and remarked that “you had better go South with me; I will take good care of you. Besides, when the war breaks out, the colored people will suffer in the North. The Northern people will look upon them as the cause of the war, and I fear, in their exasperation, will be inclined to treat you harshly” (71). Knowing better than to head back to the south, Elizabeth stayed in D.C. with the desire to work as a dressmaker for the first lady.

This became a reality when she was recommended for the position by another lady. This lead her to have a unique look at the private life of the Lincolns. The most notable of these was what she observed after Willie died at a young age. She was in the room with the President when he saw Willie and “great sobs choked his utterance. He buried his head in his hands, and his tall frame was convulsed with emotion… His grief unnerved him, and made him a weak, passive child” (103). This complexity bring much more light on the man that the President was. He was more than just a strong man who lead his country unflinchingly through war. Elizabeth’s story serves as a reminder that he was just an ordinary man who was able to do extraordinary things.

Elizabeth was also there for the assignation of the President as well. Only a few days before, Mrs. Lincoln remarked “Yes, yes, Mr. Lincoln’s life is always exposed. Ah, no one knows what it is to live in constant dread of some fearful tragedy. The President has been warned so often, that I tremble for him on every public occasion. I have a presentiment that he will meet with a sudden and violent end. I pray God to protect my beloved husband from the hands of the assassin” (178). Having this only come days before the assignation is a telling sign of how confident that the President was in him not being hurt. At that time, Presidents did not believe that they could be hurt.

Elizabeth’s story holds so much valuable information on the domestic life of the Lincoln family. Even though she began her life as a slave woman, she was able to rise to such heights and become close friends with Mary Lincoln.