If one should take away anything from the story of former slave Bethany Veney, it is that the most complex nuances of social perception, and heart-wrenching aspects of human existence, can all be found in the seemingly humblest of livelihoods. Her short yet powerful narrative reveals how her unremitting faith in God empowered her to navigate the most trying of circumstances, from childhood as a slave to adulthood as a woman fighting for her freedom. 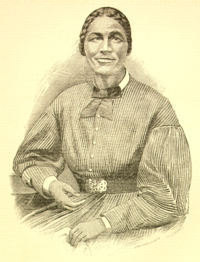 Bethany Veney shown above in a portrait, or Betty as she was known around her community, begins her tale by recalling the moment in her childhood where she was taught the importance of honesty, making it clear that it was this lesson alone that gave her the fortitude to fight for herself throughout life. Betty’s narrative is decidedly unique among the genre, for rather than describing the unspeakable horrors of slave life, she devotes her words to the morals by which she lived and the heartache that humanizes everyone. In this way, her story becomes one of humanity, not just a description of a series of events.

The relationship that Betty formed with her master’s daughter, Miss Lucy, is one that illustrates compassion and hope:

She was kind and tender-hearted. She often said she hated slavery, and wanted nothing to do with it; but she could see no way out of it.

It is here that the reader begins to see the true complexity to slave life and the psychology surrounding it. Here Betty also describes how she found the old woman kind for whom she worked while her master was away, due to the fact that she did not whip or starve her. Even she notes how a freeborn white child would have more extensive criteria for determining the kindness of someone!

Another recollection from her childhood reveals a fascinating insight into the economic allure of slavery when she overhears her master dismissing Miss Lucy’s idea to have a freeman from the North come and escort Betty to safety, for freemen quickly learn the profits to be had when they hold in their possession an ex-slave:

It was true that many Northern men came South very bitter in their opposition to slavery, and after a little while came to be the hardest and most cruel slaveholders.

Perhaps the most impactful experience in her youth occurred when Miss Lucy encouraged a friend to take Betty to a camp-meeting, where her desire to be free one day impelled her to pray and follow the path of God. All through her life it was this faith that reassured her actions. Similarly to how Charles Finney describes, it was by her own motives and will that Betty invested her faith passionately in God (Finney 2). When her master learned of her going to the church, of course she received severe punishment, but astonishingly even at her young age, she persisted in going. Not only that, but she even started encouraging her master to become a religious man, and although he never approved of Betty’s faith, he and the masters she would later served indeed admired her for her devotion and honesty. These qualities that Betty always upheld served to cultivate more positive experiences with those she served. Shown below is a camp-meeting location in Blue Ridge where Betty lived.

The writing itself is highly emotional and illustrative, particularly when expressing the treachery faced in her attempted eloping with her first love, Jerry. An instance occurs during this time where Betty is forced to lie to a slave tracker as to Jerry’s location, and remarkably she notes her guilt and shame for lying, even though it is to a white man who is threatening her, that is just how much integrity she had.

A stark contrast to Betty’s humanity emerges when retelling how she was dressed-up for auction to be sold:

This dressmaker was a most disagreeable woman, whose business it was to array such poor creatures as we in the gaudiest and most striking attire conceivable.

It is in this situation that the reader sees an apparent contrast to Betty’s previous experiences with whites such as Miss Lucy, who treat her with compassion. Here Betty is retelling the experience of being made into a product, by which all traces of humanity are stripped from the relationship between white man and slave (Johnson, 121).

Betty’s story ends with her eventually migration to Massachusetts, where she experiences this contradiction of the joy of long-sought freedom and homesickness. She remarks at the unfamiliarity of a strange new land where she is not recognized by neighbors, which provides insight into some of the deeper elements of community in slave life. The optimism stirred by her faith encapsulated the philosophy of equality and lack of resentment that Betty harbored, noting that she has finally attained a life:

…where I should need no pass written by a human hand to insure my safety as I went from place to place, but where the stamp of my humanity, imprinted by the Infinite Father of all, should be an all-sufficient guarantee in every emergency.

In her later years, Betty returned to the South to visit her old masters, and there was atonement between them despite the previous circumstances of their relationship. This shows the complex nature of the psychology surrounding how masters related to their slaves.