The Civil War changed the ideas that surrounded burial. For the first time in American history, the nation was faced with having to care for the 600,000 soldiers who died. No longer were each of the men able to receive a proper funeral and instead had to buried in mass graves on the battlefield. This went against the burial practices of the day because it was frowned upon if the dirt was touching the body. It was believed that having the deceased body not just in dirt was one of the things that separated humans from animals.

With the massive amounts of casualties there was no possible way for the opposing sides to retrieve the dead. Not only that, but also with keeping records of who passed. Due to the fast moving nature of many of the battles, “armies did not have time to attend to the dead but had to depend on the humanity of their opponents, who predictably gave precedence to their own casualties“ (Faust 70). Having to rely on the opposing side to bury both sides bodies usually lead to their side being buried first.

Many of the soldiers were not able to even have headstones or markers. If they are buried on the battlefield, sometimes the living would be able to leave behind how many were buried there but it was on a simple piece of wood. Headstones act as a monument for the individual or the family. Wealthier families would be able to have more extravagant stones where the lower class may not even be able to afford a stone at all. Back in the Civil War era, there was not a Department of Veterans Affairs and so if an individual was injured in war, there was no program that was designed to help the returned.

Since headstones are the most common type of memorial, there is a lot of diversity within them. The easiest way to see this is in Arlington National Cemetery in Virginia. Even though the idea of Arlington is the rows and rows of identical white headstones, there is a small subsection where some 482 Confederate soldiers are buried. Interestingly, even though the Confederate soldiers fought against the union, they were still considered veterans and according to Congress Public Law 85-425, “the term ‘veteran’ includes a person who served in the military or naval forces of the Confederate States of America”. This clarification is within a law that declares that Confederate soldiers will get the same pension as Union soldiers. Even though they are buried in Arlington, they are arranged in a different way. Their graves are in “concentric circles around the Confederate Monument, and their graves are marked with headstones that are distinct for their pointed tops. Legend attributes these pointed-top tombstones to a Confederate belief that the points would ‘keep Yankees from sitting on them’”. This visually marks the clear distinction between the two armies.

But should they be there in the first place? This is where I reach a contradiction. Even though Congress declared that they were veterans, the soldiers were fighting to start another country. I am confused on why the Confederates are not viewed as traitors. But I am fine with having the bodies still be there. But, I am not fine with confederate flags and imagery on or near the graves. It is one thing to have their rank and regiment on the stone, I believe that is acceptable, but I do not believe that a confederate flag should be placed outside the grave. Especially since the flag is very much a hate symbol, it has no place in a cemetery that not only contains people of color who served for the United States but also enslaved individuals are buried there. 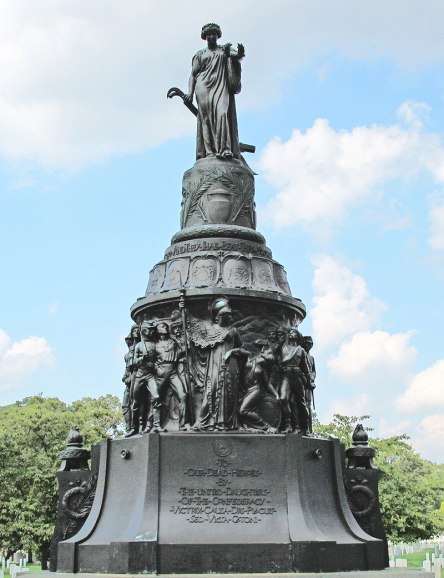 The coffins aside, there is a confederate memorial that stands in the center of the circles. There are six vignettes in the statute with the Goddess of War and Wisdom at the top. The six show the different types of people who were affected by the war. The one that I would like to bring to light is that there is a domestic enslaved woman on the monument, holding a soldier’s child as he goes off to war. I do not believe that their should be a large Confederate memorial in the cemetery, especially one with an enslaved woman on it. I can accept the burial of the soldiers and the official title of veteran and having them buried in Arlington, but having a large monument I believe is unnecessary. I understand the desire to have something symbolizing those who have fallen, but I believe that even just removing the part of the statue that has the six vignettes and keep the female figure would be much more tasteful and more respectful.

Faust, Drew Gilpin. This republic of suffering: death and the American civil war. Alfred A. Knopf, 2008.