Slavery cannot be discussed without observing the horror that it culminated in, that being the Civil War. Likewise, a discussion on the Civil War without full comprehension of the institution of slavery, and America’s economic dependence on it, is a one-sided discussion. In modern America, the nation is still struggling to reconcile the common devastation felt after the War with much subtler, and unfortunately ignored, aspects of Civil Rights and the Black experience. Although the harsh themes of death present in Faust’s book propose that there is a commonality to the suffering amongst all who fought in the war, and that it could be possible to unite as a nation in reverence for the human lives that were lost, the stark dichotomy of American beliefs during the time regarding the treatment of African Americans must not be obscured.

In the wake of the Civil War, Americans were forced to come to terms with devastation on such an unprecedented scale, to make sense of a seemingly futile battle waged for reasons that were not always apparent, that the very underpinnings of human psychology were rigorously tested. Drew Gilpin Faust, in This Republic of Suffering, redefines the image of the War through the perspective of death, and all that accompanies it. Whether it was the need to prepare oneself for an impending death, coming to grips with the loss of a loved one, or contemplating the presence of God’s will amidst such tragedy, people undoubtedly had to grapple with their own faith, beliefs, and perceptions of life

Going into the war as a divided nation, both psychologically as well as socially, Americans had a tendency to develop modes of rationalizing their losses that were in alignment with the prevailing sentiments of their regional culture. It is clear today that the prevailing form of southern commemoration is centered on sentiments of pride in those who fell fighting for states’ rights. While there is certainly much positivity to be found in a community that honors the valor demonstrated by their ancestors, pride must never prevent an objective and critical analysis of the War itself, in an attempt to arrive at a more empathetic and multi-faceted perspective on how the War affected all lives.

Faust depicts a story of the War in which dying soldier anxiously professed their faith in the hopes of salvation; where fathers carried the bullet that killed their sons until the day they too passed; where both Union and Confederate families struggled in vain to understand why their sons had perished for an unclear cause; and where human beings lost their personhood as they lay dead among the thousands, unburied. Perhaps the recognizing of this deep pain experienced by all families helps us to not approach commemoration form a point of nationalist pride, but from a perspective of human empathy and understanding, which then directly translates to the often avoided acknowledgment of the true Black experience during this time in America. 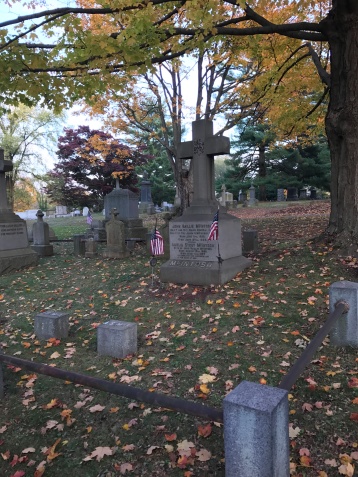 Seen here in New Brunswick’s Elmwood Cemetery is the McIntosh family grave plot. John McIntosh served as a brigadier general in the Union Army during the civli war, while his brother Jame McIntosh served as a brigadier general in the Confederate Army. A memorial such as this grave plot that encapsulates this interesting story is one that allows someone to approach the War from a point of critical understanding. What was the underlying psychology in the family that tore it apart? What motivated James to fight for the Confederate Army? It is impossible to gloss over these questions under the spell of blind national pride because such a memorial compels one to seek further knowledge. (Photo by Jared Silverstein).

Faust illustrates how this Southern method of commemorating the war exclusively through the perspective of pride came to be:

Joseph Jones counted soldiers and their deaths both to demonstrate southern valor and to explain the defeat of the hopelessly outnumbered Confederacy. Regimental commanders counted to tell the story of “how well [their unit had] stood. 259

This gives one a sense that Confederate pride was arbitrarily established out of hopelessness in an effort to justify the incomprehensible deaths of such a massive scale of people. In the modern era, it must be realized that notions of pride somewhat serve as a crutch, allowing some to pay no mind to the harsh reality of the Confederacy: the war was being waged to uphold the institution of slavery. The reality of the true Black American experience becomes obscured and ignored when the method of commemoration is only at the surface level of pride. As Frederick Douglass is quoted in the book:

The Confederate War memorials in the South are essential capsules of American history. For those who have relation or sentimental attachment to the figures in the monuments, Americans have every right to feel pride in those who fought for what they believed. The pain and discomfort that such memorials cause African Americans greatly outweighs the nostalgia for a better time felt by those in favor of the memorials. 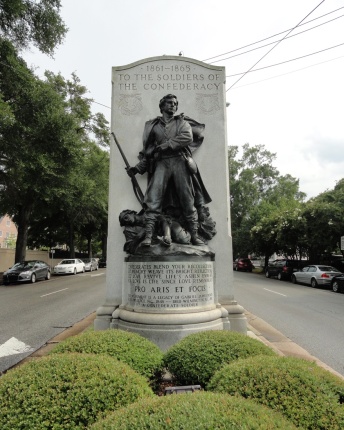 This Confederate memorial in North Carolina is one that romanticizes the bravery and honor of those soldiers who fought to defend their families and homes from the invading Union Army. To this day there is still strong feelings of pride associated with the confederacy among southerners, and even on the memorial there is language invoking the theme of love. But does this monument not leave further questions to be asked? It is as if an entire side of history, that being slavery during this time, is simply ignored when it comes to commemorating the War in the South. (The “Confederate Memorial” in Wilmington, NC depicting Gabriel James Boney Born Wallace courtesy of UNC).

While people should certainly be able to revere whomever they choose and for any reason, it is imperative that modern people, particularly the youth, stay informed about the total reality of the past. A proper form of commemoration involves recognition of all facets of history, even the harder ones to reconcile. Not only is this Confederate Memorial shown above a one-sided depiction of the past, but it is also offensive to those who are associated with this ignored history. America will not be able to come together as a nation until all people approach the past and the present from a point of empathy and informed understanding.

Faust’s approach to the Civil War through very humanizing themes such as death, killing, burying, and believing allows one to appreciate and grasp the magnitude and horror of the War as an entity in and of itself that deeply affected the nation. It is this newfound understanding that should be extended to the Black experience throughout the history of America, not kept separate from it.

Faust, Drew Gilpin. This Republic of Suffering: Death and the American Civil War. Alfred A.    Knopf, 2012.