Political cartoons have been analyzed centuries after they were published because they serve more than one purpose of humorizing a political event. Every detail the illustrator adds into the political cartoon serves a purpose. Political cartoons are found in newspapers and online articles commenting on issues and uproars in the country. The “main purpose, though, is not to amuse you but to persuade you” into agreeing with their stance on the said issue. The cartoonist goal is to persuade their audience by changing their opinion on a political issue.

In much of the 19th century, there was a huge upheaval in women fighting for equal rights, especially in the political setting. “The campaign for women’s suffrage began in earnest in the decades before the Civil War,” women wanted the voting restrictions expanded to not just all white men. The women of the 19th century wanted to steer away from the idea of “true womanhood” where a wife should be submissive to her husband, and always tend to the home and children. Seneca Falls convention in 1848 took place in New York. Leaders of the convention agreed “American women were autonomous individuals who deserved their own political identities.” During this time the women wrote The Declaration of Sentiments, modeling the Declaration of Independence, stating,

“all men and women are created equal, that they are endowed by their creator with certain inalienable rights, that among these are life, liberty, and the pursuit of happiness.”

Obviously, if there is one side to the fight, there is the opposing side; the white males who did not want to share the vote with the women. Thus began endless political cartoons between pro women’s suffrage and anti women’s suffrage.

There was a major pushback from expanding that right to all women. In the late 19th century, Puck magazine took advantage of the new printing technology and reinvented what political cartoons meant to Americans. “Puck played a critical transitional role in the evolution of American humor” with their exaggerated, yet influential political cartoons. When the suffragists were gaining more publicity, Puck magazine weighed in on the situation. 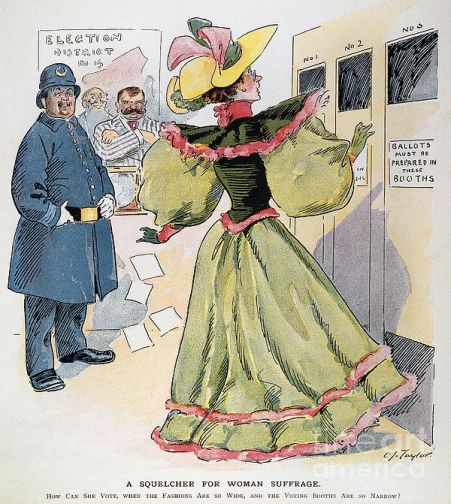 Title: “A Squelcher for Woman Suffrage” By C.J Taylor
Published: Keppler & Schwarzmann, 1894 June 6.
Caption: How Can She Vote, When the Fashions Are so Wide and the Voting Booths are so Narrow?

“A Squelcher for Woman Suffrage” the title alone answers how society felt about women voting. Referring to her as a “squelcher” is a colloquial term for a loud noise, such as a squelch. This infers that the women protesting for their right to voice just sound like a hi-pitch frequency noise, and nobody is listening to the suffragists. The woman depicted in the cartoon is wearing an elaborate dress with a petticoat and a hat and the colors are loud and bright. This would typically be worn to a formal event, but the cartoonist depicted in this attire because in the men’s minds voting for women would be a formal outing out of the house for them. The men in the cartoon are shocked and angered by the woman because she is holding up time for other voters. As she looks at the ballot box that is “narrow” the sign reads “ballots must be prepared in these booths”.  This explains why the woman cannot fit because her dress is too large and she is also illustrated too tall to fit inside the booth, as well. The thought of these men in the late 19th century is that women were more concerned with fashion then they were with politics. The fear was that women actually knew nothing about politics and they would be easily persuaded to vote for certain candidates based on bribery and pure ignorance. The woman in the cartoon only concerned with fashion would be deemed ‘unfit’ to vote for the future leader of the country.

Another way white males would depict women would be that they were unconcerned with politics altogether. The women depicted in this cartoon are at a country club, therefore they are wealthy women, who have nothing better to do with themselves but lounge around and gossip with other women. The caption was difficult to make out but it seemed to be a conversation between two women gossiping about another woman. All the women have their feet up and are dressed formally at the country club. This depiction of women shows that they have nothing better to do with themselves insinuating they are only fighting for their right to vote because they are bored. The idea the cartoonist was trying to convey was that if women really wanted to be apart of the political conversation, they would spend their free time reading the newspaper and paying attention to what was happening in the political sphere. They would not use their husband’s money and lounge around all day at the country club without any responsibilities.

Majority of the political cartoonists were men, and they were appealing to many of the males that read their magazines or newspapers. Women suffragists were an easy target to satirize in political cartoons. But it did create the conversation about whether women should be allowed to vote or not. The 19th amendment that allowed women to vote happened in the early 20th century, but they received plenty of backlash leading up to that moment. It goes to show the impact political cartoons had on society and how exaggerated and offensive they can be to all different groups in the United States.