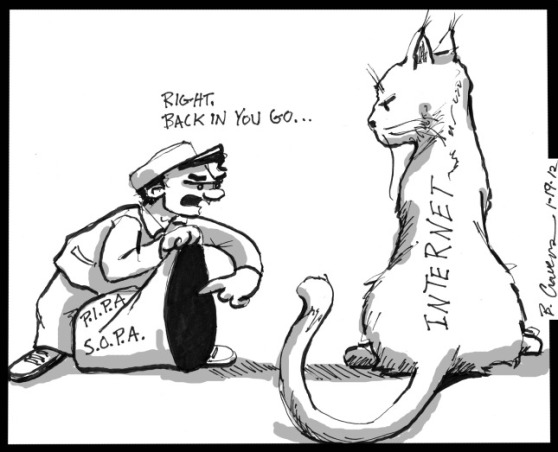 In 1994, John Perry Barlow published a prophetic essay in Computerworld College Edition titled “Jack In, Young Pioneer” (available here), in which he outlined how he and his fellows humans were being

“swallowed by the cultural superorganism of digital technology, a beast now well beyond anyone’s control… slouching off to Cyberspace with us in its belly.”

Even in the mid-1990s, when many American colleges and universities were first establishing email accounts and servers  for students, Barlow was aware that even at that early stage of the digital revolution, most of our everyday lives were governed directly or indirectly through our interactions with what he calls “Cyberspace.” Barlow, who had run a ranch in Wyoming, described his own encounter with new forms of technology as one in which he had no choice but to surrender, since he:

was as culturally doomed as the Tasaday of New Guinea. Technology had so empowered my competitors with fertilizer, growth hormones, and computerized futures hedging programs, that only a few of us were necessary to feed those remaining Americans who still eat beef. Such atavistic practices as mine were like stone axes against smart bombs.

Barlow relies on the myth of the frontier, to explain the significance of the new digital frontier that ” we are all going [to] whether we want to or not.”

“Misfits and dreamers, rejected by or rejecting society, are pushed out into the margins. There they set up camp and maintain what little order they want in it by unwritten codes, the honor of thieves, the Code of the West.

Despite their usual haplessness, they discover resources and start exploiting them. Burghers and boosters back in the civilized regions hear of these discoveries. Settlers, a milder sort, come in with their women and children and are repelled by the savagery and license of their predecessors, whether mountain men, prospectors, or Indians. They send for troops to secure the frontier for the Rotary Club and the PTA. They elect representatives, pass laws, and, pretty soon, they’ve created another place which is boring but which at least appears predictable.”

His cartoon-ish history of society’s conquest of the frontier, and its transformation from a place of independent individuals bound by nothing more than honor, codes, and pledges to the banal, conformity of suburbia, is troubling for a number of reasons, not the least of which for its reversal of causality. Without state investment in railroads, military conquests of indigenous lands, and capital investment from cities such as New York and London, there is no frontier. It is unclear who occupies Barlow’s imagined camps. For every misfit and dreamer who landed in the West, there were many more whose initial arrival on the frontier was enabled by the very forces Barlow claims came only subsequently.

Barlow’s problematic use of the frontier aside – he is certainly not the first – his fascinating personal history, and the backgrounds that explain his initial involvement in debates on the freedom of the internet, are worth noting. He was, among other things (see a fascinating biography, preserved as an artifact of the earlier Internet, here), a lyricist for the Grateful Dead. A favorite song that he wrote is “Cassidy” from 1970.

“Cassidy,” though named after the recently born daughter of the band’s office manager, is also a reference to Neal Cassady, the drug-using, constantly riffing, and always wandering bisexual muse of the Beat Generation, who appears as Dean Moriarty in  Jack Kerouac’s novel On the Road. As with many things Barlow, it is a statement about freedom, in Cassidy’s case what being a free spirit might mean to her as she enters the world, and a reflection on Cassady, who had embodied a particular idea of a person who lived freely, in opposition to social norms, yet had died two years earlier at only the age of 41. (Or at least this is one popular interpretation. According to the comments section of this discussion, on the Dead’s official website, cats may have something to do with the story as well. Narrative form in a Deadhead comments section follows its own rhythms.) 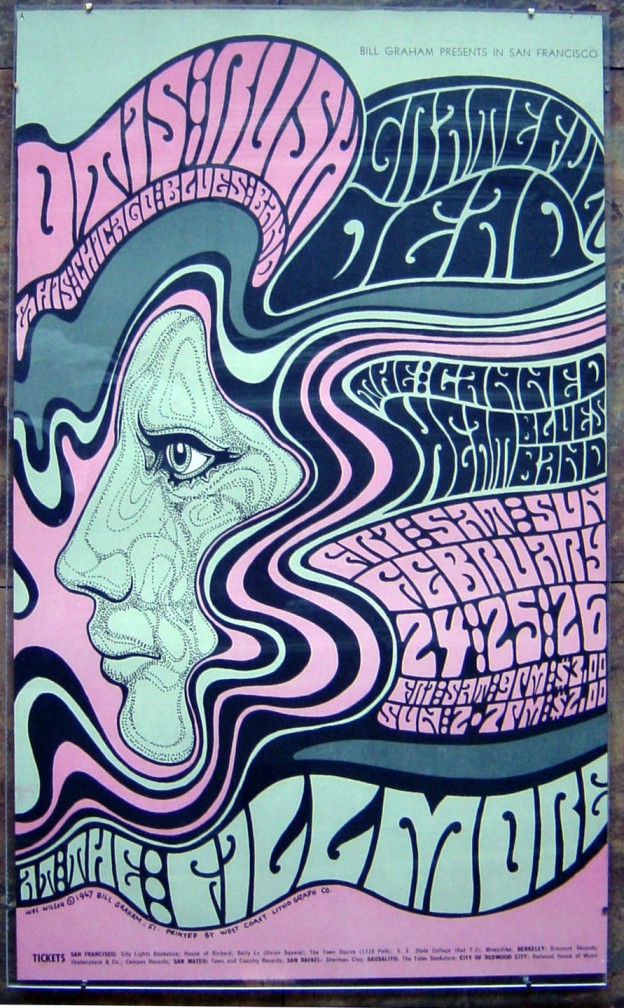 A super groovy Grateful Dead poster for a 1967 show at the Fillmore West in San Francisco. We take for granted the ability to circulate an image like this, using simple functions like cutting and pasting, or with digital files, by transmitting bit torrents, but this ability to reproduce and duplicate cultural information is quite novel. Bootlegging novels in the 18th century, for example, required the ownership of a printing press and therefore significant capital investment in equipment and education in the skills needed to work that equipment. Not so anymore. For a fascinating history of piracy and accompanying legal and philosophical debates about the cultural and intellectual ownership of property, see Adrian Johns’ wonderful book Piracy.

Rather than discourage bootlegging at their shows, which many bands did – at the behest of record labels, who believed that unauthorized recordings cut into potential profits – the Grateful Dead encouraged the practice. As one anecdote goes, the band, upon observing a fan using equipment to record a live performance at the Hollywood Palladium in 1970, instructed, “You, with the microphone, if you want a good recording, you’ll need to move back about forty feet.”.

An NPR segment explores how bands make royalties on their intellectual property.

In a 1994 Wired article titled “The Economy of Ideas,” Barlow noted that

In regard to my own soft product, rock ‘n’ roll songs, there is no question that the band I write them for, the Grateful Dead, has increased its popularity enormously by giving them away. We have been letting people tape our concerts since the early seventies, but instead of reducing the demand for our product, we are now the largest concert draw in America, a fact that is at least in part attributable to the popularity generated by those tapes.

True, I don’t get any royalties on the millions of copies of my songs which have been extracted from concerts, but I see no reason to complain. The fact is, no one but the Grateful Dead can perform a Grateful Dead song, so if you want the experience and not its thin projection, you have to buy a ticket from us. In other words, our intellectual property protection derives from our being the only real-time source of it.

For Barlow, so long as the embodied experience, the one that took place in real time, possessed exchange value,  distributing its analog counterpart only served to promote the real product.

The policy that the Grateful Dead and its representatives pursue today is that Soundboard recordings, coordinated by the band, which have also been released as master versions by record labels, are available, but only streaming and not as downloads. Recordings made by audience members are available for download. All of this is organized on the Internet Archive, the “non-profit  digital library with the stated mission of ‘universal access to all knowledge.'” (The Dead’s page is here.) 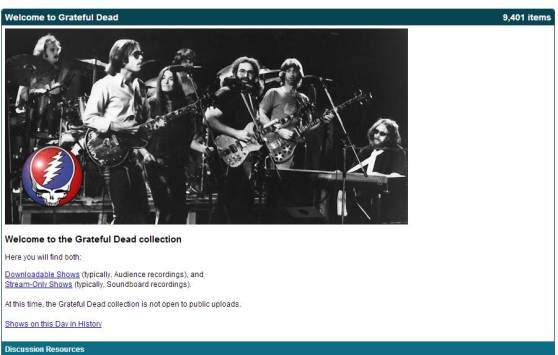 The homepage for the Grateful Dead Internet Archive collection of streamable and downloadable music.

The site is a playland for Deadheads, catering to fans’ collective obsession with cataloging and tracing performance patterns. Nick Paumgarten, a New Yorker music critic and devotee, gives thirteen of his favorite recordings of live concerts here. The 1974 show he references in Oregon has a lovely version of “I Know You Rider.” Be sure to listen at the end of the song to the surreal announcement that fire trucks will be driving around providing water to thirsty Deadheads, who are instructed not to be alarmed by their presence. Despite the site’s rich offerings, as my above link to the YouTube video of “Cassidy” demonstrates – and as Barlow more than anyone knows and appreciates – distribution on the Internet remains a place in which rules of conduct apply only loosely.

Barlow is a co-founder of the Electronic Frontier Foundation (EFF), a name that borrows from his influential essay. The EFF is one of the most prominent non-profit defenders of the legal rights and freedoms of Internet “free speech, privacy, innovation, and consumer rights.” Just two days ago, the EFF reported on the testimony it had compiled and provided to a federal judge in the case of First Unitarian Church of Los Angeles v. NSA, on how the National Security Agency “Surveillance Chilled the Right to Association.” The long strange trip continues…