Material culture is defined by historian Jules Prown as “the study through artifacts of the beliefs – values, ideas, attitudes, and assumptions – of a particular community or society at a given time.” In studying artifacts, often the connection between the object and its significance is not clear. Ephemera is a “term used by archivists and librarians to describe occasional publications and paper documents, material objects, or items that fall into the miscellaneous category when catalogued” (Cvetkovich 111). Ann Cvetkovich describes how ephemeral, seemingly meaningless objects can become of significant value when one is trying to archive emotions and feelings, such as those feelings associated with lesbian history. In this case, meaning is derived through affects – “associated with nostalgia, personal memory, fantasy, and trauma” (112). It is in this way – through archiving seemingly mundane objects – that I will attempt to document some aspects of my own material culture.

This dress was purchased for me by my mother when I was in high school. It is white, lacy, not too short or low-cut, but still flattering. It is ultimately “feminine”. I bought it because I wanted to look like Taylor Swift, and because I was caught up in an obsession that has plagued American society for as long as we’ve been a country.

The first object that I have chosen to document is the above white dress. In “The Cult of True Womanhood”, Barbara Welter argues that 19th century women were expected to possess the values of piety, purity, submissiveness and domesticity (152). I believe these values are still present in current American society, and that they have very harmful effects on young girls. From believing that women should be not only more pious than their male counterparts, but also responsible for male morality (an idea that ties into rape culture and allows us to all too often blame the victim), to believing that females should be pure (which feeds the double standard present with regards to male/female sexuality), the ideas of “True Womanhood” are still, unfortunately present. It can be seen in The Queen of Versailles in the enthusiasm surrounding the Miss America Pageants, a tradition that has always placed value in purity, and virginity in young girls, while still of course expecting that they are physically appealing. It was also the sentiment behind my white dress, which is in a way, as the commodification of these values, a good that was purchased in their honor.

Since coming to college, I have long abandoned my desire to be perceived as “pure.” In fact, I would consider my own material culture now to be one of dissent. In my head, I have sort of developed the idea that whatever I should be consuming (what typical middle class white girls that go to Rutgers consume), I want nothing to do with. I buy only used clothing, and avoid at all costs: North Face fleeces, Ugg boots, anything with a spirit R, etc. I take great pride in incorporating into my outfits clothes typically worn by: boys, old ladies, racial minorities, etc.

I got Timberland boots because I typically saw them being worn by African American males, or men working in manual labor. I have worn them every day, without fail, since I got them over a year ago. They are filthy, smelly, tough and when I wear them I walk down the street with a great sense of pride. If there is one object I would like to speak for me, it is my shoes. Yet, this in itself seems hypocritical, because I am not a male construction worker, and never will be.

In a way I may be using this object because I am ashamed of my own privilege as white and middle-class. Either way, perhaps not much has changed since high school after all: I still use consumer goods to display my values and beliefs. 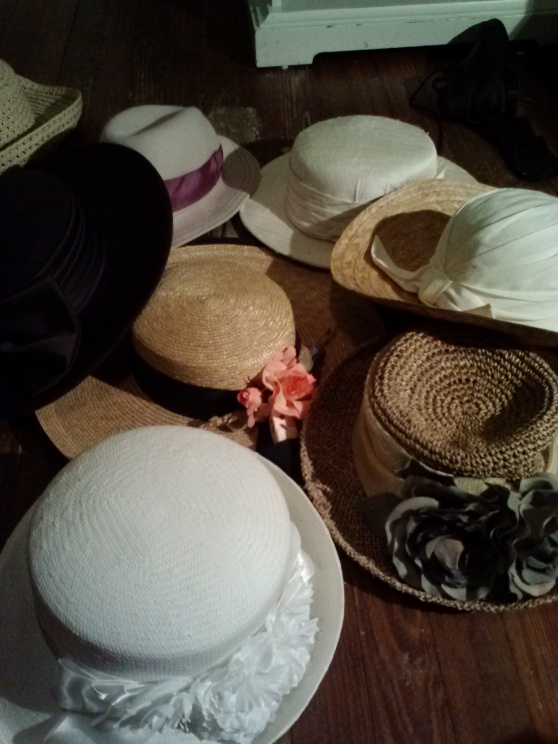 These are just some of the hats in my collection. I got them all from a thrift store in Highland Park for $1.00 each. On Christmas Eve 2013, I was travelling home via train and wearing one with my outfit for mass. In Camden, NJ, I was harassed for being rich because of my “fancy clothes.” I told the man I got my entire outfit for under five dollars, but he didn’t care, and it didn’t matter, because I was portraying myself as someone very wealthy.

The last object I have chosen to document is my hat collection. In one scene of The Queen of Versailles, David Siegel says something I’m paraphrasing as, “Everybody wants to be rich, and if they aren’t rich, they want to feel rich.” Even though I like to believe I have rejected most tenants of consumer culture, I cannot say that I never want to feel rich. When I wear these hats, I feel fabulously wealthy. Even if it is in a more antiquated and dramatic way, I can understand the appeal of feeling very rich. Perhaps then, David Siegel has touched on something fundamental to American culture: With money, you can be whoever you want. Money can buy not just your clothes, but your values as well. Everybody wants to rich!

This post was completed as part of an assignment interpreting the “material culture” of home, and how objects, keepsakes, and ephemera from our domestic lives contribute to our social identities. For additional information on the assignment, please visit: https://americanstudiesmediacultureprogram.wordpress.com/the-concept-of-home-spring-2014-the-archeology-of-home/